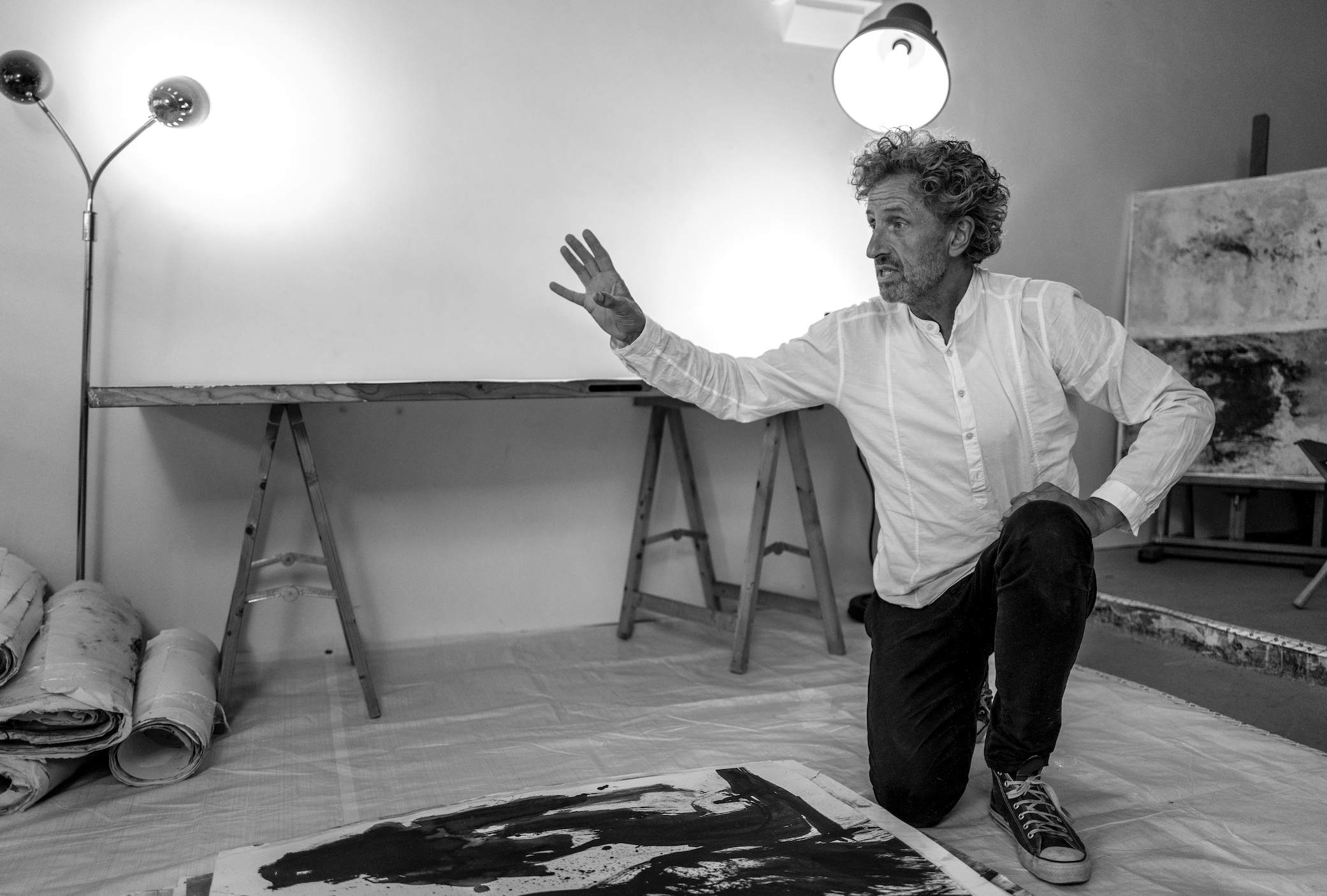 Previously, in this series.

To change my genre from nude painting to conceptual art, I decided to paint a 1000 of my ‘nudes’ white. This process–I called it ‘Back to White’–greatly affected my ways of thinking about art and the nature of change. It is also a core practice of my doctoral work at Ashridge Business School where I am doing a PhD in Organizational Change. In the prologue you can read and see me explain the context of this series. The first episode is about the three phases of Liminality, that ‘elusive bit in-between’ at the heart of change. This episode is about the first phase of these, ‘the separation phase’ and how we may leave our habitual selves behind before entering the liminal. My inquiry here:

What living rituals survive in the workplace that help us end things well?

About the way we end things

Let’s go back some one-and-a-half years, to ‘day one’ of my Back to White process. I had laid out some five paintings on the floor and started covering the first nudes with a layer of white, when I noticed they wouldn’t so easily disappear under the white. This is what I spoke into my voice recorder:

“The nudes won’t go! They seem to resist the process of become part of something new. They revolt. I have tried to apply more layers of white, but still they won’t disappear. When the white dries, the figures beneath shine through. It’s irritating. What I had in mind doesn’t seem to work. I will have to give in. Some of the old work will remain visible. Pity! (Journal, voice recording, 29.09.18).

So unexpected, yet so familiar: things that don’t want to go away when I am trying to move on. Working away in my studio I feel desire, fear, sadness, relief nestling somewhere in my body. Painting my nudes white I feel an emotional ‘move towards’ as much a as a ‘move away.’ Adding layers of white to my old work, I wonder: how do we end things? I ponder how, over time, rituals have changed and disappeared. But has our need for them disappeared too? When I gave up my resistance to the nudes’ resistance, I discovered the meaning of a separation ritual: It made me accept resistance and freed me up to further explorations.

In this episode I will look at the function of the ‘separation ritual’ as the first stage of Rites of Passage (van Gennep, 1960). How anthropology explains this separation ritual as providing a ‘neutral zone’ for our anxieties around leaving the familiar before stepping into the unknown. I will bring in some examples of separation rituals from my consulting practice. I will end this episode with a claim that organizations have dysfunctional separation rituals that play an important part in stopping us from flourishing and doing good work well. I invite you, followers old and new, to join me on a path that looks something like this:

(1)  Separation rituals: the need for a neutral zone

Passing through the zone

In Rites of Passage written in 1909 and published in 1960, van Gennep discusses the nature of the ‘symbolic and spacial areas of transition’ and the ‘ceremonies’ that accompany these passages from an anthropological point of view. He distinguishes 1) ‘rites of separation from a previous world, 2) preliminal rites, those executed during the transitional stage 3) liminal (or threshold) rites and 4) the ceremonies of incorporation into the new world, postliminal rites.’

In this article I focus on preliminal rites of separation. In the next episodes, I will be concerned with the liminal and postliminal rites. The separation rites, according to van Gennep, are enacted when a person ‘leaves one world behind and enters a new one.’ They provide a sense of security by creating a neutral zone. Imagine a stranger passing under something or between two branches before entering a village. At rivers and mountain passes travelers may sacrifice a piece of clothing, leaving behind a lock of hair. At thresholds, visitors perform purification rites, washing, cleansing, typical rites of separation from previous surroundings.

Rituals create a neutral zones to adjust and make us feel secure. The pace in my studio, for example, and the pace in the organizations where I work. What a difference! Pace down rituals I use to adjust: take a shower, play music, change my outfit. Pace up rituals: work-out, suit on, check social media, phone calls. We need our bodies to meet our heads that have already arrived. We need to wean ourselves from the wail of ‘daddy, daddy,’ still ringing in our ears. We need a special time and space to pass ‘between two branches’ before we start our day in the office. Stand still! Coffee in hand. Yes, I feel my body has arrived; I feel secure, ready for my first meeting. Many such separation rituals have survived in the corporate world, beyond these personal rituals of checking in with a cup of coffee.

A project team having a meeting before a Kanban board is a ritual for project members to keep an overview of the workflow. Kanban processes were originally designed for software development but are now applied widely across many industries. Each project member breaks away from his/her routine to meet the collective and identify future bottlenecks. It is one of many instances where rational rituals allow people to separate themselves from the world they know (my work) and feel secure about the world they don’t (their work).

Another example. I am standing in front of the boardroom. I have a meeting with the managing director of a mental health institution. ‘Are you joining us?’ I hear a voice behind me. I turn and see a man in overalls, tools hanging from his belt. He escorts us to an open space where some ten people are gathered in a circle. Next to me is a patient in a wheelchair, throwing me a welcoming glance. I see her clenched hand holding the steering controls. The man in overalls welcomes the group and reads a poem. Silence. A woman across from me tells what her day looks like. Others follow. Very informal, smiles and references to poem. The group breaks up. We walk back to the room. The managing director explains that the erratic behavior of the patients often prevents these ‘plans.’ from being realized. “But this ritual helps us opening up to our primary purpose.” I feel a difference in my body, as I enter the boardroom. Only now have I arrived. I feel composed. The conversation that follows is engaged and full of life.

As I was working at my Back to White rite of passage I came across another kind of ritual: the ‘empty ritual.’ This journal entry captures how my transformational ritual had suddenly turned empty, stagnant and sadly devoid of meaning:

‘Today, in mid-production of painting one piece after another, I became aware of a sense of callousness. I was losing a sense of sensibility, sensitiveness. Less mindful of what I had painted and more concerned with production: a thousand. It was almost as if I was working mechanically . I was making one painting white after another. As if I was working in a factory. Slicing of chicken heads. I had to go through 50 a day. Meeting a deadline.’ (Journal, 15.05.19)

Sitting back rereading my journal, I reflected that this notion of ’empty rituals’ points to a serious ‘problem’ in organizations of doing meaningless work. Couched in empty rituals that are, I believe, essentially separation rituals. They too, create a neutral zone, but instead of promoting movement, they promote stagnation. They seem to take us somewhere, but in reality they prevent us from moving forward. Also they create a false sense of security. Their ‘compulsive activities’ keep our interactions ‘safely’ on the surface: “We can’t have that conversation now”

The fear of the real

How similar are the compulsive, mechanical movements of the mechanical movements in my studio to the deadly meetings we continue to attend in organizations? The silly procedures that nobody remembers why they were installed? The unnecessary emails we are bombarded with or the speeches we agree to listen to despite their lame contents? Or even the HR-systems of compensation and benefits that are utterly devoid of real meaning? Why are they there? Why can’t we stop them? They seem such a waste of time. Keeping us from having the real conversations we so desperately need to have. ‘Protecting’ us from the fear of the real. From getting below the surface and being more daring in what we say, more human in what we do.

The Back to white ritual: from resistance to acceptance

Can we paint them over white, somehow, these empty rituals? They may not completely disappear, like my nudes. They may shine through. Lets accept that. Can we find more narratives, rituals, to reconcile the familiar with the exotic and our compulsive activities with our purposeful actions? Where our identities melt and form new temporary bonds with living questions? This place, the liminal, will be the subject of the next episode. Meanwhile… Let’s continue our dialogue!

I am curious what you think:

What rituals facilitate your endings? What empty rituals in organizations do you recognize? What makes them empty? What theories can explain them? What stories can you tell? What sense can you make?