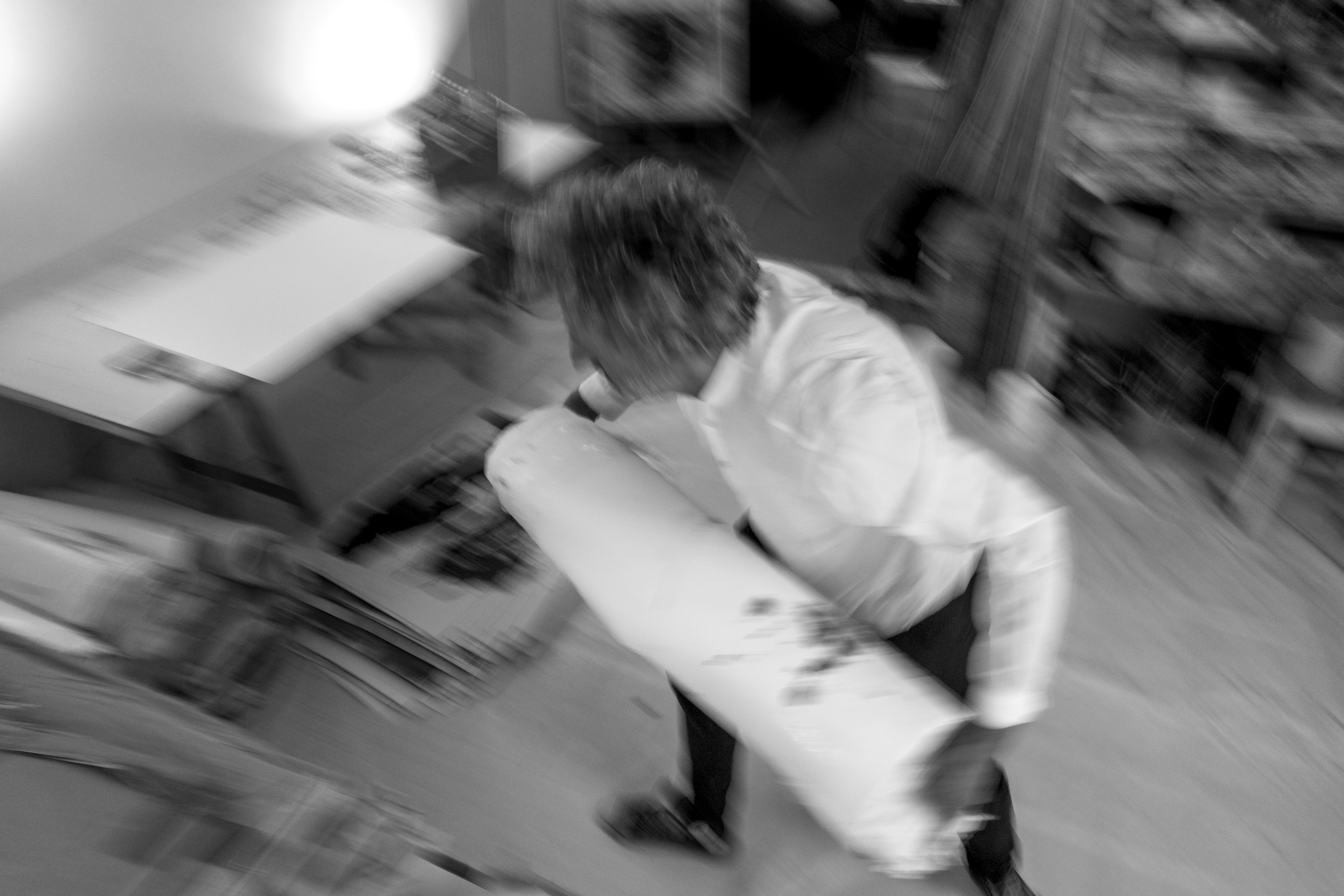 To change my genre from nude painting to conceptual art, I decided to paint a 1000 of my ‘nudes’ white. This process–I called it ‘Back to White’–greatly affected my ways of thinking about art and the nature of change. In the prologue you can read and see me explain the context of this series. Stepping away from my habitual genre of painting, allowing myself the freedom of finding another voice and style and surfacing with a new work of art; it all follows a specific pattern that has helped me to know what I know artfully. Let me talk to/with you about this Liminality, the space in-between.

In my studio: breaking open the silence of the past

‘On the brown paper it says ‘2003’ in my hasty handwriting. I tear it off to reveal the nudes that have not seen the daylight since I painted them some 15 years ago. The sound echoes in my studio and it rips open the silence of the past. My heart pounding now. I will paint all of these white. One by one. My eyes scan the pile, guiltily. Do I recognize what I have made? Yes. I do. Every one of them. The ones that I should have thrown away long ago, the ones I vividly remember making, the ones I could fall back in love with. Some I have signed and show the date. Others stayed anonymous. It seems as if I hear them breathing in the fresh air. The brown paper removed. Reclaiming their right to be seen. Little do they suspect the white fate that is hanging over them…This is madness! But I will do it’ (Journal, 12th Sept 2018).

I wrote this shortly after my resolve to paint a thousand paintings white, to mark my transition to a new genre of art. This journal-entry from half a year ago shines through this article. The experience of my heart pounding, my sense of guilt, my determination, you’ll see, have become a part of the story ahead.

This is what I have in mind as the through-line for this article:

(1)  looking at the concept of liminality space, its historical development, its ritualistic origin and its three stages of separation, in-betweenness and incorporation

(2)  weave in an example from my consultancy practice and connect liminality to organizational change as well as to the artistic practice in my studio.

(3)  take the concept of liminality to the heart of my inquiry: what are the rituals we need to enter the liminal and re-emerge from it?

1.   Liminal space: development of the concept

In the literature the idea of liminal space is associated with literal or metaphoric communicative spaces where identities change and rituals punctuate the community’s opening and closing. The word ‘limen’ means threshold in Latin and the concept of liminality derives from anthropology. In the first half of the 19th century, Van Gennep uses the term to describe tribal ‘rites of passage.’ In the seventies ‘the liminal’ was adopted to talk about societal change processes (Turner, 1972). More recently use of liminality is gaining momentum with authors writing about organizational and global change (Thomassen, 2018).

Rites of passage: a universal expression of life

Van Gennep’s book is worth a read. And a good alternative to Campbell’s popular ‘A Hero with a Thousand Faces’ which offers quite a one-sided, masculine perspective on transformative narratives. Van Gennep’s is also concerned with narrative and ritual, but less gendered, more universal. When he discusses rites around pregnancy and menstruation he talks about this with equally compassionate intimacy as when he talks about boys being secluded and incorporated into the community as they traverse into manhood.

Separation, incorporation and in between: the liminal

Based on his anthropological studies of tribal rites, Van Gennep distinguishes a special category of ‘rites of passage’ involving three stages. The rites connected to the ‘separation phase’ are intended to facilitate the transition from being disjointed from the every-day flow of activities. It talks of rituals before crossing dangerous mountains or entering a stranger’s house, dealing essentially on what lies ahead, unchartered, as you leave the world you know behind. I know about this phase and its promise of pain in my studio as I break the silence, get the hidden nudes out of the storage and look at them with a mixed of guilt and determination. The quote from my journal above is describing me entering a rite of passage, the separation phase.

At the other end of the liminal is the ‘incorporation phase.’ Here rituals lead you to a new state in which obligations and norms differ from those before. Young men return with a new name from their lonely stay in the forest, young women are welcomed back in the village as mothers with their newly born. ‘Another thirty white nude are incorporated into my new work of art. I have hung them to dry. The growing, carefully stacked piles of dried paintings are becoming part of a new whole’ (Journal, June 23, 2020). This is where the promise of a new start blossoms, a celebratory incorporation, honoring all that went before.

In between these thresholds, the liminal phase, the transformation proper takes place. No strange eyes for the young men and women to watch how they struggle. In this phase, you are free to find your own way. Freedom is temporarily unbounded; identities are allowed to shift shape. Unused to all this freedom and dwelling with ambiguity and uncertainty, the liminées are offered gifts from the unknown. ‘As my white brush moves across the paper and the white closes in, there is a special moment when the painting is neither a nude nor a white painting. Where this happens exactly is not to be defined. It cannot be described, only witnessed. Deep within me, where I am essentially human’ (Journal, 6th October 2018). After I had painted a hundred, I became very melancholy in my body. My life events seemed to melt into the Back to White process. I called my ex-wife and we agreed to arrange a separation ceremony. To honor the time we had spent together and share our separate lives ahead.

2. Example from my practice: on entering and leaving spaces

So far I have tried to ground the idea of liminality by linking it to the experiences of the Back to White in my studio. My intention with this series is also to link artful knowing to organizational change.

Traces that we leave behind

So, here’s me in a room as a facilitator with some twenty staff and line managers of a sizable mental health institution. We have gathered that day around the theme of ‘place.’ It is part of a sensemaking process following a transition towards self-organization. “I am conscious of the traces you left, when I took over you position,” one manager says, when she gives an account of her sense of place. “I struggled deciding what to keep and what to erase. How I might find myself in what you had left behind, thinking of what was good for the organization and our clients,” she continued. I see people’s eyes turn inward, the pace of the conversation slows down.

What to keep, what to erase?

All that is said before is somehow affected by her comment. The conversation deepens and I am thinking of my own Back to White work. The resolve (‘I will do this’), the guilt (scanning my half-forgotten works), the forward thrust (the white fate hanging over them). Another manager responds: “It is not until now that I am aware of the heritage I create myself. One day someone will take over my role and decide what to respect or what to erase.” When it is my turn to share I actually tell about my Back to White process. During the break, I overhear a new young manager making an appointment with the manager she has just succeeded, “to talk about this.”

3. That elusive bit in between (that is all-important)

At the heart of my inquiry is to understand what happens at moments like this. They matter so much. There must be some ‘knowing’ about how to get there.

In this example, the mention of ‘traces,’ the deepening of the conversation, the feelings that arose, defying interpretation, leading two managers to having a conversation afterwards, they would otherwise not have had. Did we plan all this when we designed the program? No. Certainly not. Yet it is more or less what we hoped would happen. If it is not planned, how did it emerge? What is behind this? What is the ordering principle? I want to know. As a consultant but also as a man, a son, a brother, a father. I want to understand why and how we suddenly understand each other. What happens when a salesman stops selling and a client starts buying? When a teacher stops teaching and a pupil starts learning? When weakness turns into strength, when guilt transforms into shame, when ‘I have to’ changes in to ‘I want to,’ showing becomes revealing, and consistency becomes coherence. When my nudes become a white piece of art. When stopping becomes beginning and you become me. When we become the world. That elusive bit in-between!

Being lost and being found

The more time I spend in my studio, the more I read and write, the more I get a sense of the urgency these questions and how important it is to know more about what that elusive bit in-between is. In two weeks’ time that will be the theme of Liminality, the space in-between, part 2. You’re cordially invited to continue our exploration through the liminal and being lost. It will take us to process philosophy and we will hit on some real organizational ‘problems’ that are about our inability to distinguish between being lost and being really lost. As a cliffhanger this wonderful poem by David Wagoner which, incidentally, I read at the end of the meeting with the managers I mentioned above:

Stand still. The trees ahead and bushes beside you

Are not lost. Wherever you are is called Here,

And you must treat it as a powerful stranger,

Must ask permission to know it and be known.

The forest breathes. Listen. It answers,

I have made this place around you.

If you leave it, you may come back again, saying Here.

No two trees are the same to Raven

No two branches are the same to Wren.

If what a tree or a bush does is lost on you,

You are surely lost. Stand still. The forest knows

Where you are. You must let it find you.

So my question at the end of this and please feel invited to engage:

What are the rituals that help or hinder you from being found?